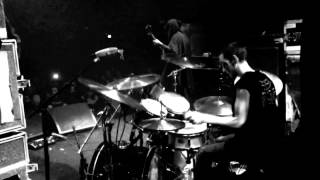 Norwegian black metal tyrants 1349 have concluded the Metal Alliance Tour 2014 alongside Behemoth, Goatwhore, and Inquision, having brought Aural Hellfire to the United States and Canada. Their next stop is Throne Fest in Belgium this Saturday, May 10th.

Below is a YouTube playlist with 3 clips from the recent US tour displaying elements of the Aural Hellfire you can expect from 1349:

The first taste of the upcoming new album (due this fall) is the single “Slaves“, now available on iTunes, Spotify, WiMP and all other digital services. Watch the lyric video here:

“Slaves” will also be released on an etched 7 inch vinyl, limited to 666 copies! You can pre-order the 7″ at http://1349.indierecordings.no/. Shipping date is June 20th. To celebrate the coming release, all Indie Recordings 1349 catalogue at their web shop is available for campaign prices here: http://www.omerch.eu/shop/indierecordings/search.php?pg=1&stext=1349&scat=2315&nobox=true. More information on the new album’s title and release date will follow.

Regarding the new track, vocalist Ravn commented: “We chose ‘Slaves’ because it showcases very well the spirit of the coming album. “Slaves” has already become a fan favorite live on the Metal Alliance tour and the tour-exclusive 7″ stock is depleting fast. It is with great pride we see it unleashed upon the world!”

Founded in Norway in 1997, 1349 have remained a constant influence on the Norwegian black metal scene. With a penchant for lightning speed riffing, blazing drums, and apocalyptic lyrics, the band has trail-blazed the underground, surpassing many of their peers through brute musical force. Following a trio of landmark albums, namely 2003’s “Liberation“, 2004’s “Beyond the Apocalypse“, and 2005’s “Hellfire“, 1349 is set to reestablish their dominance in world-wide extreme metal.